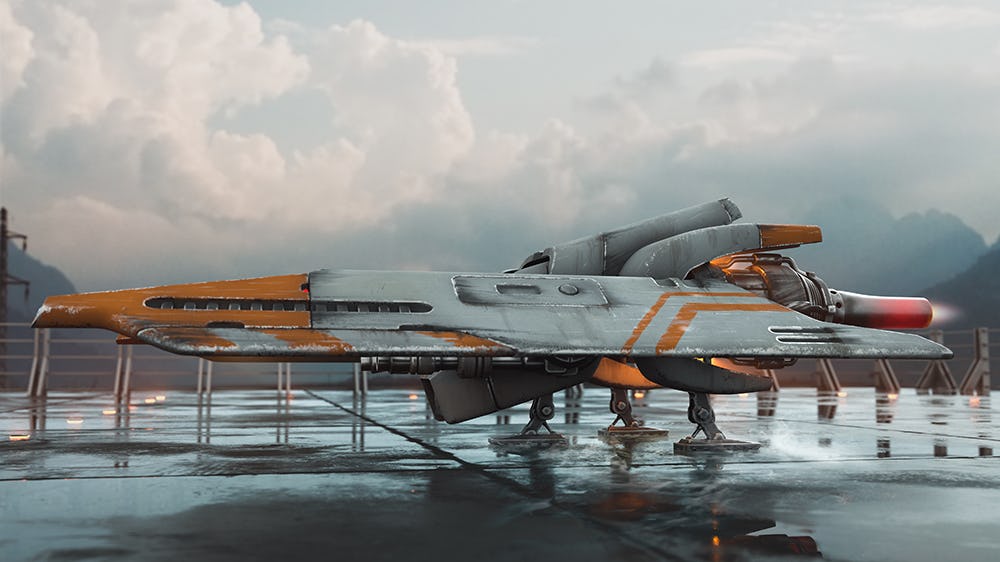 We wish we could drive these 9 vehicles in real life.

Science Fiction is full of all manner of strange new worlds and gross alien species you can meet and kill, but the real thrill of the genre for many of us is the massive stable of vehicles.

Whether it’s demolishing an invading space armada, exploring the surface of an alien planet, or merely seeing all the wonders the galaxy has to offer, here are the top ten sci-fi vehicles we wish would leap out of our PCs and into our driveways.

The Star Wars franchise boasts many amazing space ships. But as much as we’d never turn down a chance to fly around in our own X-Wing or TIE Fighter, the top spot for coolest ship in the Star Wars galaxy goes to Han Solo’s usually reliable hunk of junk, the Millennium Falcon. Not only is this amazing ship capable of outrunning Imperial cruisers, but it’s also crazy maneuverable and roomy enough to carry, often literally, the hopes of the entire Alliance in its roomy interior. And as if that weren’t good enough, you can pass the time in Hyperspace playing Holochess with the Wookiee co-pilot. As the man says, she may not look like much, but she’s got it where it counts, kid.

It might be one of the few planet bound vehicles on this list, but that doesn’t mean that Halo’s Warthog stays on the ground. This remarkably agile ATV delivers all the physics-powered mayhem you could want, flipping and ramping and generally somersaulting across every square inch of ground that the Covenant tries to capture.

And with apologies to Chewbacca, this is one vehicle where the second person has just as much fun as the first thanks to the rear mounted machine gun. In terms of going off-roading and running down Covenant Grunts, this is basically your best option.

If the Falcon is the workhorse of interstellar space travel, the Normandy is the luxury model. Equipped with an undeniably sleek design and stealth technology, it’s the best way to be noticed and not be noticed at the same time. Like several of the other vehicles on this list, both versions of the Normandy serve as a convenient and expansive home base for its crew.

This is a ship where a lot of the drama takes place as you move from one destination to another.

TARDIS / Doctor Who: The Eternity Clock

It may not have wheels or engines, but of course the TARDIS is a vehicle. And while this one isn’t exactly suited to Death Star trench runs, it more than makes up for it by being able to travel through space and time. No matter where or when you’d like to be, the TARDIS can get you there.

If that wasn’t nearly enough for you (and it really should be), the ship is also infinitely large on the inside, which is a nice trick to play on unsuspecting passengers. Throw in near indestructibility and a ship consciousness and you’ve got everything you need for an adventure. And if it ever does get boring, you can always argue with your friends about whether the acronym should be capitalized or not (note: it should.)

Proof positive that the play’s the thing, Asteroids is proof that you don’t need hundreds of polygons and detailed textures to make a ship that stands out.

The humble little triangle from Asteroids is still one of the most iconic and badass ships in the pantheon of gaming. Sure, a lot of that cred comes from it being among the first, but it still holds up today.

It’s hard to imagine a simpler or sleeker design, and the turning controls and inertia based thrust adds a layer of nuance that only the best pilots can master. And if it all becomes too much, there’s always the option for a timely hyperspace escape.

You can even play Astroids in your browser now.

A non-flying entry on the list, the TRON Light Cycle is the fastest thing in the game. They may not be very sturdy or suitable for especially dangerous situations, but that’s kind of the point: the speed of the Light Cycle means that it’s your best bet for getting out of that kind of trouble in the first place.

On the grid, they’re limited to movement in only four directions but once you get them off the Grid, they’re as maneuverable as you need them to be. And since they rez in whenever you need one, you never have to worry about where you park.

Where most of the spaceships in this list are built as a means of getting from one system to another, or taking part in death defying dogfights, the Enterprise is built more for exploration and research.

As such, it’s the perfect vehicle for moments when you’ve had your fill of fighting or transport and want to focus on a journey built around teamwork and science.

While the motivations of the agency itself may have left a lot to be desired, they definitely knew how to build amazing hardware. Representing SHIELD’s ability to project its power around the world, the Helicarrier is not only the best way to keep tabs on invading alien species, but also works if you need to, say, help evacuate an Eastern European city as it rises precariously into the sky.

Plus, if you use it to visit New York, you’ll never forget where you parked.

While the other vehicles on the list may have more flash and better fit a specific job, the jet pack in Goat Simulator isn’t about work; it’s about fun. You won’t have to worry about fighting aliens or anything quite so dangerous in this case. Instead, you’ll just be able to focus on getting above the ground level view that gravity and evolution have stuck you with. If nothing else, it would be nice to see how a jetpack operates when it’s piloted by a person and not a goat.

These are our favorite Sci-Fi vehicles from video games. What are yours? Let us know on twitter.